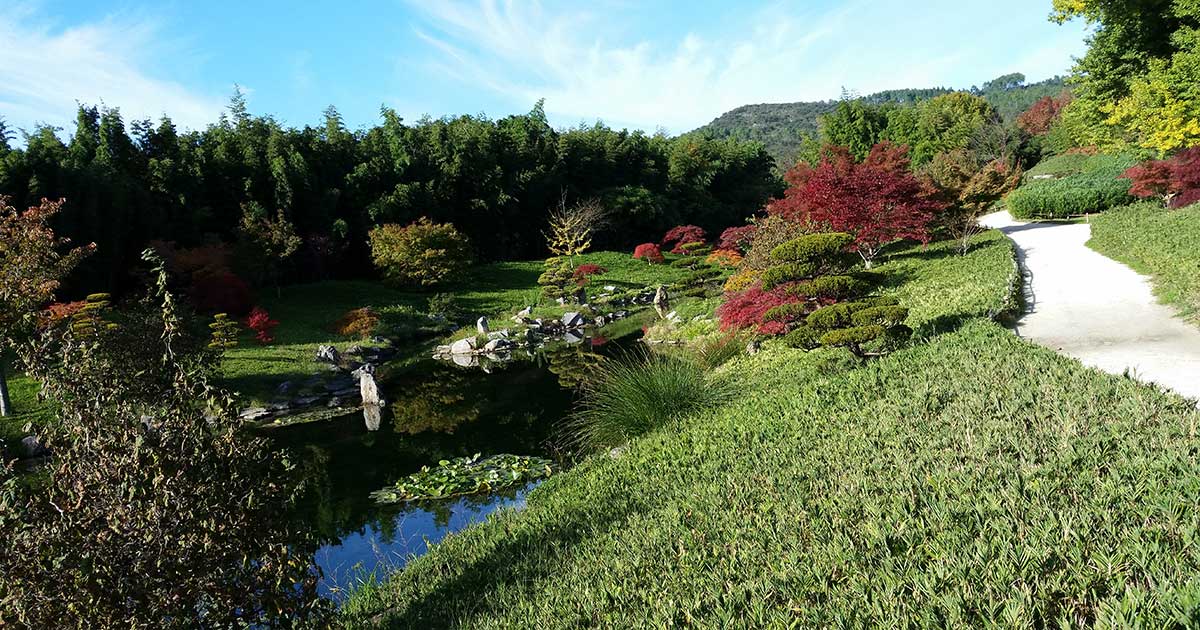 The bamboo plantation of Anduze

The bamboo plantation in Cévennes gardoises

43 km from the cottages “In shade of an olive tree” the bamboo plantation is classified among the most beautiful botanical gardens in France. There are more than 1000 varieties of species: more than 240 types of bamboos, remarkable plants, trees (japanese maples, camelias, gingkos Biloba, century-old redwoods) and rare flowers. All continents are represented through this diversity. Many species are unique in Europe and this park is definitely worth a visit.

A little of history

It was Eugène Mazel, a man passionate about horticulture and natural sciences, who created this extraordinary garden. In 1955, he began developing the Pragrance estate and endowed the park with irrigation canals. He planted the first specimens in 1956 and attempted to acclimatize species from Asia, North America and Himalaya. In 1890, he unfortunately went bankrupt and in 1902, Gaston Nègre bought the property and went on his work. In 1953, Maurice Nègre, his son, agricultural engineer and his wife opened the park to the public and a famous picture was filmed there: “The wages of fear” with Yves Montand. Another famous film was filmed there later : “Paul and Virginie”. In 1956, a particularly cold winter decimated the species and only the trees and the bamboos resisted in frost. In 1958, the Gardon river overflowed and damaged the park. In 1977, Muriel Nègre, her daughter and her husband, an agricultural engineer also wanted to develop the park. Since 2004, Muriel Nègre is president of the park which became a “remarkable garden” in 2005. In 2006, the bamboo park celebrated his 150th birthday. And in 2008, it was added to the additional list of historic monuments.

Attractions of the bamboo plantation

Giant bamboo forest, bambusarum (selection of different species on the site), Japanese garden, labyrinth, Laotian village, dragon valley which covers 15000 M2, based on Feng Shui, greenhouses built in 1860, the garden of Eugène Mazels ponds, floral garden, garden center (where you can buy bamboos and other plants), shop and snack bar in summer. You can spend here a very pleasant day, magical for youngs and older people. The trip is definitely worth a visit.

Back to the cottages “A l’ombre d’un olivier”

After this very pleasant day, unforgettable and surprising, for young and old, because it is a walk that can be family-friendly, you can relax by the pool of the lodges “In the shade of an olive tree”,
in the sun or cool off with a well deserved bath, to the sound of cicadas or both, of course. The important thing is to make the most of your stay and your vacation!

This website uses cookies to improve your experience while you navigate through the website. Out of these, the cookies that are categorized as necessary are stored on your browser as they are essential for the working of basic functionalities of the website. We also use third-party cookies that help us analyze and understand how you use this website. These cookies will be stored in your browser only with your consent. You also have the option to opt-out of these cookies. But opting out of some of these cookies may affect your browsing experience.
Necessary Always Enabled
Necessary cookies are absolutely essential for the website to function properly. This category only includes cookies that ensures basic functionalities and security features of the website. These cookies do not store any personal information.
Non-necessary
Any cookies that may not be particularly necessary for the website to function and is used specifically to collect user personal data via analytics, ads, other embedded contents are termed as non-necessary cookies. It is mandatory to procure user consent prior to running these cookies on your website.
SAVE & ACCEPT